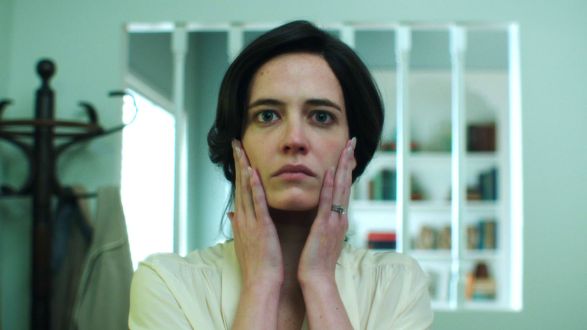 White Bird in a Blizzard is the first film I’ve seen in a long time that features a young woman’s coming of age story. These are some of my most enjoyable films to watch and the complexity of Shailene Woodley’s character, Kat Evens, is one of the most entertaining and well-rounded aspects.

I couldn’t help seeing Woodley as this innocent and naive girl, especially having seen The Fault In Our Stars not too long ago and some of her character’s crude dialogue and actions go against her typical role. But Kat Connors is a young woman who has many layers and one of those layers is a smart yet confused teenager who needs guidance and love, but not just from her boyfriend Phil and their sex craved relationship. I may have had a hard time believing Kat’s rebellious, risqué ways at first, but as scenes unfold and another woman is honed in on (Kat’s mother Eve) her actions start to make sense.

Eve Connors is a housewife gone mad. She’s an eerie kind of Betty Draper. In a series of flashbacks and voice-over, daughter Kat explains her mother’s slow breakdown: Eve was a secretary at an office and she had nothing else going for her so she married the boring, incompetent Brock Connors. During one of these voice-overs Eve’s elegant face gets closer to the lens and this sincere moment has us thinking: she really had nothing else going for her because of this occupation? But what the film suggests having the two women’s decades of life side by side is that these ideas were a reflection of the time in which Eve lived through. If a woman like Eve wasn’t already married or had a secure, successful occupation during her young adult years, she better find one or the other soon. Brock isn’t the only boring one though. Eve becomes the same way with her solid color dresses and routine. She’s left in a house with nothing else to do but simply play house. Be a mother, a wife and be happy with that. Except as we come to see, Eve refuses to settle after a while. Perhaps she saw a different future when Brock and she started a family, but life offered a much different reality.

Through Kat’s portrayal of her mother are where things come together. We come to know Kat and all these layers because her actions have everything to do with her mother’s life. She is sweet to her father because she pities everything Eve had bestowed upon him. In other scenes the kind adolescent is seducing the detective whose working on her mother’s case after her disappearance. But even this relationship we come to understand. Of course Kat wants a sexually liberated lifestyle after her mother vanishes. She wants to do whatever she pleases and with whomever she pleases because her mother didn’t. And look where that got everyone?

The buildup of Kat’s emotions is also done very well. At first after her mother’s disappearance, she has no feelings, at least that’s how she acts, but as she gets older and visits her quiet hometown years later this absence starts to fill her entire being. What really happened to her mother? Did she leave because she was unhappy and perhaps severely depressed? Was she dead? There’s a lot not shown in the film, but a lot said. For example, we don’t see how the relationship between Eve and Brock was behind closed doors. Yet Eve’s dialogue provokes curiosity during flashbacks when she drunkenly ridicules her husband for controlling her when all we see is Kat’s mother acting strange towards her only daughter with jealousy and spite while Brock is quiet and kind. This leads us to wonder if Eve simply made this up or if there was more to the story than what Kat saw. After all, we see these scenes through her eyes and at times she is unintentionally unreliable. However, it’s what makes the story everything it’s supposed to be.

It’s all part of Kat’s growing process. When you’re younger you see things a certain way. When we get older tiny truths sneak through the cracks and life changes. We change. It’s what happens to Eve Connors as well. She had a life that seemed one way and over time turned out differently. It’s what viewers feel, I’d imagine, when watching the film. We think one way, but are entirely surprised by the answers that reveal themselves at the end. No one is really who they say they are, except for Kat who’s confused, young, smart, beautiful, and vulnerable no matter what happens.