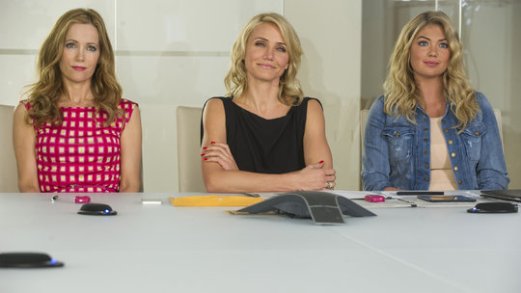 I have not seen a truly funny female comedy since Bridesmaids. Every time I hear of one or a friend tells me, ” You have to see it, it’s as funny as Bridesmaids,” I get too excited for my own good. This happened when someone told me The Other Woman was even funnier. Not only did I compare the comedy the entire time, but over analyzed the three women the movie is based around whose ultimate goal is to get revenge on the one man who dammed them all. It is a silly film, one that’s obviously not meant to be taken seriously, but I couldn’t help looking closer and taking things personally.

What bothered me most was not that the movie didn’t live up to the humorous expectation, but that I saw a similar film years ago, John Tucker Must Die that too involved a group of females getting back at a guy who played all of them one way or the other. But they were high schoolers which made more sense and was an actual funny movie that’s lessons in the end revealed how insignificant it is to manipulate another person’s life and how revolving happiness around one man doesn’t do anyone any good. However, Leslie Mann’s character is the most frustrating aspect in The Other Woman. She plays Kate King the wife of womanizer Mark and once she learns of her husband’s affairs and all the lies in between she weans herself off him at first, participants with friends Carly (Cameron Diaz) and Amber (Kate Upton) to make his manhood dwindle, but then melts back into a relationship with a man she truly doesn’t know and never really did. It’s not her actions that upset me, but the lack of realistic emotion Kate must be feeling. Her husband is a real gentleman for one evening. Places her on the highest pedestal during his work party. Showers her with compliments. Promises her he will never leave. And bam that’s it—the childish games are over—Kate is going to stick beside her husband. Of course we see this coming, as we do with Brittany Snow’s character (who also plays a Kate) in John Tucker Must Die when she too has a moment of weakness and calls off the games. We also see Kate’s major epiphanies coming soon after when she realizes her friends were right and her judgments were wrong in The Other Woman. But in the real girl world, would Kate’s insecurities only consist of crying in her wedding dress, confiding in her husband’s mistress, and drowning her sorrows with alcohol? Or would she pick at her husband until he finally revealed the truth.

At the same time, the film does not hesitate to reveal Kate’s flighty personality or should I say stupidity. But it’s not for the reasons you may be thinking. In the beginning of the movie, Kate signs papers her husband tells her to without reading them over as he nonchalantly tells her he already reviewed them. Of course she trusts this man at the time being but it’s her comments afterward that make me cringe and mostly make me sad to see movies representing women in such ways. Kate tells Mark that just by looking at the forms makes her want to go to “Brain Camp”. She continues by explaining what exactly Brain Camp is: “You know, Brain Camp to get smarter.” Kate proceeds to admire her husband’s intelligence because he read and understood an entire document on his own. This is supposed to be comedy. It’s a chance for audiences all around the world to grasp how incompetent one woman is, sit back and laugh.

Carly reveals the killer confidence and knowledge that perhaps compensates for Kate’s. And their female bond is what made me keep the movie playing because a message is hidden through their friendship. Don’t choose one person to be with for eternity, but many. A husband, friends, animals, family. If you invest in one person, they are guaranteed to let you down. Although the friendship evolves into something real, believable, the cheesy and incongruent ending when the three women finally triumph Mark is so outlandish, it only made me see one thing: this can never happen. Kate’s prior unintelligent moments flip when she proves her husband wrong, but the trio is completely fictionalized as the ending so apparently plays out. I guess a closing where women are viewed in another way would take too much effort.